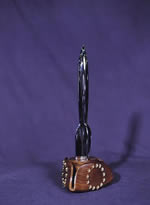 The 1954 Retrospective Hugo Award winners were announced at the “Time Travel” event on the evening of Friday, September 3, 2004 at Noreascon 4 in Boston, Massachusetts. Bob Eggleton presented the Retro Hugo Awards on the “Past” half of the stage, while Hugo rocket maker and Fan Guest of Honor Peter Weston conducted interviews of the other Guests of Honor — Terry Pratchett, William Tenn (Phil Klass), and Jack Speer — on the “Present” side of the stage. Music was provided by the theremin orchestra “The Lothars”.

Nominators were provided with a helpful retrospective Introduction and Guide to the Works of 1953 created by Andrew I. Porter, Joe Siclari, and Edie Stern.