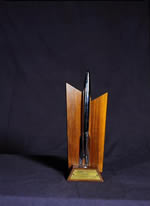 Note: No shortlist of finalists was published in this category. The ballot instructions read “Pro mag names must be written in.”

Finalist information obtained from page 15 of the 1956 Worldcon Progress Report 3. Listing order does not imply order of finish on final ballot. The shortlist appears to have been created by the 1956 Worldcon Committee, rather than from an initial round of solicitation of nominations as the current Awards do. The final ballot included space for write-in candidates. We thank Olav Rokne for bringing to our attention this list of finalists in September 2017.