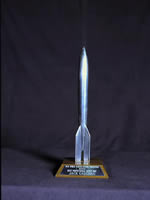 (Our thanks to Tom Whitmore, who retyped and edited a transcription of the 1968 Hugo Awards Ceremony made by Alva Rogers for a planned “Proceedings of Baycon (1968 Worldcon).” See Tom’s notes within the document regarding the history of the transcription and his work on it.)