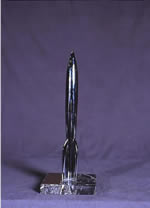 Best Original Art Work
Some sources, including some from the 1990 Worldcon itself, mistakenly label this “Not a Hugo,” but it was added to the ballot by the 1990 Worldcon Committee’s authority to create an additional category. Per the WSFS Constitution, it is a Hugo Award. The 1990 WSFS Business Meeting adopted Best Original Art Work as a regular category, and the 1991 WSFS Business Meeting ratified the addition, so the Best Original Art Work category first appeared as a regular category in 1992. The 1991 Worldcon declined to use its additional-category authority that year, and therefore this category did not appear in 1991. This category should therefore be considered to have been awarded in 1990 and 1992-1996, after which it was discontinued.