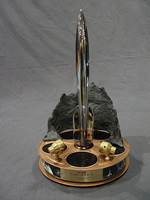 442 members of L.A.con III and Intersection submitted valid nominating ballots. There were 939 valid final ballots received. Of these voters, 558 also voted for the 1946 Retro-Hugo Awards.

For the full breakdown of voting and nomination see here. (This is a PDF of an archived copy of the 1996 Worldcon web site and has certain formatting challenges.)