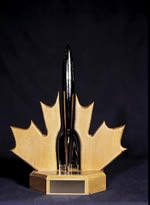 738 valid nominating ballots were received and counted from the members of ConJosé and Torcon 3, the 2002 and 2013 World Science Fiction Conventions.