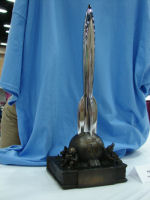 Note: Category had only 3 nominees due to the minimum 5% requirement of Section 3.8.5 of the WSFS constitution.

**These winners have recused themselves from future eligibility for these works in these categories.

The John W. Campbell Award for Best New Writer (476 nominating ballots cast)
Award for the best new professional science fiction or fantasy writer of 2011 or 2012, sponsored by Dell Magazines. (Not a Hugo Award, but administered along with the Hugo Awards.)

1343 valid nominating ballots (1329 electronic and 14 paper) were received and counted from the members of Chicon 7, LoneStarCon 3 and Loncon 3, the 2012-2014 World Science Fiction Conventions.

1848 valid final ballots were cast by the members of LoneStarCon 3.