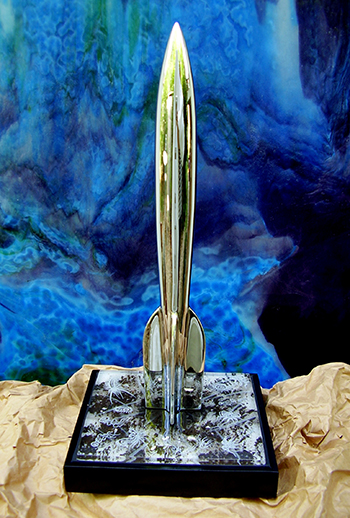 Renovation’s theme of “New Frontiers” inspired me a lot. It immediately evoked to me other worlds with other kinds of life and our search for that alien life.

I watched a documentary about Enceladus, the moon of Saturn, and its amazing geysers of dust and water. Like a lot of people then I thought about great rifts under the sea on Earth, and the unbelievable life forms which grow there. I’m fascinated by the abyss world — jellyfish, squid, and worms live there that are eating icy methane! When I see those extreme living creatures, I imagine that life exists somewhere else.

So, to do this base, I’ve been inspired by different pictures of abyss creatures and pictures of Enceladus, Callisto and also the surface of Iapetus, which shows a very graphical black and white design that I could do in glass painting.

This is a rocket which has landed on an icy world, with creatures swimming underneath its surface.

The base I’ve made is in fused glass with some inclusions. I’m a stained-glass maker, so I use flat glass; I don’t make my own glass. To do the base, I’ve cut some pieces of uncolored flat glass (5 layers) of 16 x 14 cm each (6.30 in x 5.51 in), and 1.2 cm thick (0.47 in). Each layer of glass has been hand painted with grisaille (iron oxide with glass powder) which has been used since the middle ages to paint the details on colored glass for stained-glass. The grisailles I took were brown, white, red ochre and some blue spots. I’ve also painted some pseudo meteor impacts and the burn traces of the trophy’s “landing”. Also, Little “alien” creatures and bacteria have been painted with white grisaille as inclusions in the glass. All of these layers were fused together at 817 °C (1502.6 °F) in a special kiln.

In the glass, I’ve included little sparks of real silver leaves, as an allusion to Reno’s region – Nevada, the silver state. 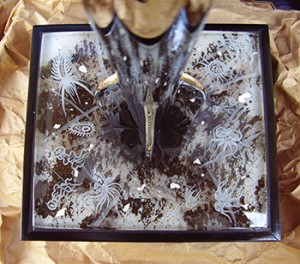 Detail of the 2011 Hugo Award base design, as seen from above.