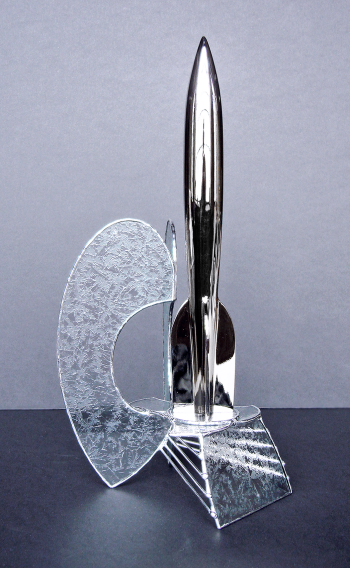 From the moment I learned that Chicago had won the bid to host the 2012 Worldcon, I knew that I would be submitting a design for a Chicago-themed Hugo Award base.

I dipped deep into my Art History lessons, and Architectural knowledge of Chicago and used the inspiration of three great masters, spanning almost a hundred years of Chicago history.

My first inspiration is the grandfather of modern architecture, Lous Sullivan

Sullivan came to Chicago in 1873,and pioneered the use of steel in architecture. This radically changed how buildings were designed, almost completely removing any previous limits on height. This ushered in the age of the skyscraper.

He practiced Architecture in Chicago for over 50 years. In that time he designed a building for the World’s Columbian Exposition, and he designed the now demolished Chicago Stock Exchange Building.

To honor Louis Sullivan I chose a type of glass called “Glue Chip” that has an organic leaf-like form which is reminiscent of the highly ornate designs at the entrance of the Carson, Pirie, Scott and Company Building.

My second inspiration is Mies van der Rohe, who is the Father of the glass and steel skyscraper

After World War I, steel was much more widely used as a building material, but it was usually hidden under a façade of more classical ornamentation. Mies rejected this. He abandoned decorative ornamentation completely, and started designing buildings with the structural steel exposed for all to see.

For 20 years, Mies was the head of the School of Architecture at The Illinois Institute of Technology here in Chicago. He passed his philosophy onto the next generation of architects, who then filled Chicago with Glass & Steel skyscrapers.

I honor the vision of Miese van der Rohe by leaving all of the structure exposed in my stained glass piece, and also by the use of a steel load bearing plate under the Hugo rocket.

The biggest influence in my design is the French artist Pablo Picasso.

In 1963, Picasso was commissioned to design what would become one of the most iconic landmarks of Chicago, a sculpture that would later be referred to as just “The Picasso.”

To this day, no one is sure what the original object is supposed to be. Some think it looks like a baboon, some say it looks like an afghan hound. But Art historians currently believe that it is the profile of one of his models, which you can see if you look from just the right angle.

It is this instantly recognizable Chicago landmark that I used as the inspiration of my overall form.

It has been a privilege to design the Hugo base for my home city and I am honored that my design was chosen. Thank you.