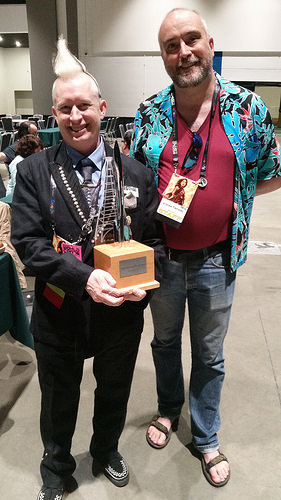 This photograph of Worldcon 76 Chair, Kevin Roche, pictured with his husband, Andy Trembley, gives a much better view of the tower behind the rocket. The design is based on the San José Electric Light Tower.

The base of the trophy is made from cherry wood because cherries were a major crop in San José before the advent of Silicon Valley. 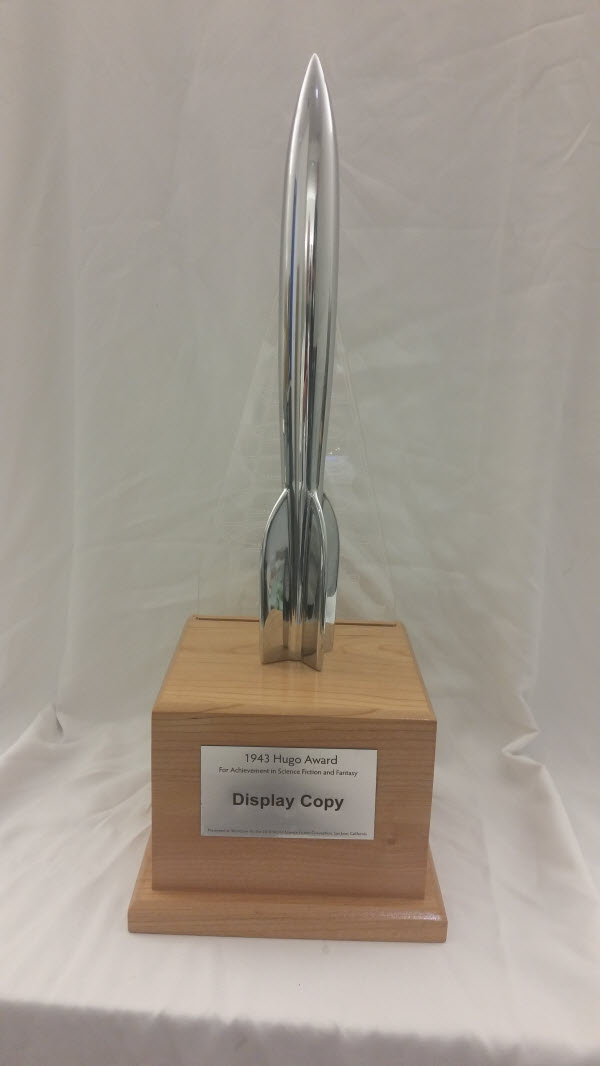 This is the trophy for the 1943 Retro-Hugo Awards, the winners of which were announced this evening. The trophy design is by Kevin Roche.

The finalists for the 2017 Hugo Awards and John W. Campbell Award for Best New Writer were announced via social media by Woldcon 75, the 2017 Worldcon, on April 4, 2017.

2464 valid nominating ballots (2458 electronic and 6 paper) were received and counted from the members of the 2016, 2017 and 2018 World Science Fiction Conventions. Members were eligible to make up to five equally-weighted nominations in each category. The number of voters was second only to last year’s record-setting total at MidAmeriCon II.

A full breakdown of nominations, including how many nominations each finalist received and a list of works that did not make the final ballot but were in the top fifteen places, will be published after the Hugo Award ceremony in August.

The 2017 Hugo Award and John W. Campbell Award winners will be announced on Friday August 11, 2017, at the Hugo Awards Ceremony in Helsinki.

The finalists for this year’s Hugo Awards were announced online by Worldcon 75 today. You can watch the announcement in the video below.

The nominating period for this year’s Hugo Awards is now closed. The folks from Helsinki are reporting on Twitter that a large number of ballots has been received.

Looks like we have the second highest participation ever in Hugo nominations! 🚀

We are expecting the announcement of the finalists some time in April. For further information on Helsinki’s schedule for the Awards, see their website.

Worldcon 75 in Helsinki has announced that it will use its special powers to create one Hugo Award category to trial the proposed Best Series Hugo. This is in line with current tradition whereby seated Worldcons use their category creation power to test proposed new categories that have passed one Business Meeting and are up for ratification at the Worldcon in question. This gives members of WSFS an opportunity to see the category in action before voting on ratification.

The full text of the Worldcon 75 press release is as follows:
END_OF_DOCUMENT_TOKEN_TO_BE_REPLACED

With apologies for the delay, we are now able to release the full voting breakdown for the 1941 Retro Hugo Awards. You can find the document here (pdf).

We have also updated the 2016 statistics document to correct a small number of typographical errors in the original document. These did not affect the results of the Awards in any way, and all of the numbers were correct. The only significant change is in the top 15 for fancast where The Coode Street Podcast was incorrectly listed twice. The second listing should have been for Jay and Miles X-Plain the X-Men, presented by Jay Edidin and Miles Stokes.

The 74th World Science Fiction Convention, MidAmeriCon II, announced the winners of the 2016 Hugo Awards at a ceremony on the evening of Saturday, August 20, 2016. The ceremony was hosted by Toastmaster, Pat Cadigan, assisted by Jan Siegel. 3,130 valid ballots were received and counted in the final ballot.

The 2016 Hugo Award trophy base was designed by Sarah Felix.

The John W. Campbell Award for Best New Writer (Not a Hugo Award, but administered along with the Hugo Awards) went to:

Full details of the voting are available here (PDF).

US President Obama has been open about his interest in science fiction. He had the new Star Wars film screened at the White House before heading off to Hawaii for his Christmas holiday. He is also a very keen reader, and we were delighted to hear that one of the books he took with him for holiday reading was last year’s Hugo Award winner for Best Novel, The Three Body Problem by Cixin Liu, translated by Ken Liu translator and published by Tor Books.

We hope you enjoyed the book, Mr. President. And do let us know if you have any recommendations for this year’s Hugos.