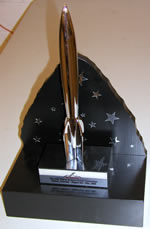 The results of the 2008 Hugo Awards, as announced at Denvention 3, the 66th World Science Fiction Convention, in Denver, Colorado, USA, on August 9th 2008, are as follows: