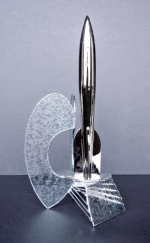 Video recording of the 2012 Hugo Awards Ceremony courtesy of Chicon 7.