Andrea Hairston will be joining Sheree Renée Thomas in hosting the Hugo Awards Ceremony 2021 during DisCon III, the World Science Fiction Convention (Worldcon), to be held in Washington, DC., December 15-19, 2021.

Malka Older, one of the Special Guests at the convention, had originally been scheduled to co-host, but because her children are too young to be vaccinated, she made the difficult decision to withdraw from in-person events.

For more details of the changes to the 2021 Hugo Awards Ceremony, see the announcement on the DisCon III website.

Voting for the 2021 Hugo Awards closed on November 19, 2021. The Hugo Awards will be presented in a ceremony on the evening of Saturday, December 18, 2021. DisCon III intends to live-stream the ceremony. The link to the convention’s live-stream coverage will be announced closer to the convention. Results will also be posted via the @worldcon2021 Twitter feed as they are announced. The Hugo Awards Website will not be doing live text-only coverage of the ceremony this year.

The final ballot for the 2021 Hugo Awards, Lodestar Award for Best Young Adult Book, and the Astounding Award for Best New Writer opened on May 27, 2021. Members of DisCon III have or will shortly receive an e-mail with the necessary information for voting online. Members can access their ballots via the DisCon III Hugo Awards website by logging in & clicking on “My Memberships and Ballots.”

A paper copy of the ballot is also available for download from the DisCon III website. We strongly encourage people to vote online if possible.

Voting is open to all supporting and attending members of DisCon III, the 2021 Worldcon. Per DisCon III’s announcement, voting will be open until November 19, 2021, 23:59 Pacific Standard Time (November 20 at 02:59 Eastern Standard Time, 07:59 Greenwich Mean Time/UTC, and 20:59 New Zealand Daylight Time).

The Hugo Awards Voter Packet, containing shortlisted works and samples of finalists’ works, is still being prepared. DisCon III will make a separate announcement when the Hugo Voter Packet is available to members of DisCon III.

DisCon III, the 79th World Science Fiction Convention, announced on April 13, 2021 the finalists for the 2021 Hugo Awards, Astounding Award for Best New Writer, and Lodestar Award for Best Young Adult Book in a YouTube video hosted by Ulysses Campbell, Malka Older, and Sheree Renée Thomas. The full list of finalists is on the 2021 Hugo Awards page.

There were 1249 valid nominating ballots (1246 electronic and 3 paper) received and counted from the members of the 2020 and 2021 World Science Fiction Conventions for the 2021 Hugo Awards. Voting on the final ballot will open later in April. Due to the postponement of DisCon III from their original date in August to December 15-19, 2021, voting will close on November 19, 2021.

Only DisCon III members will be able to vote on the final ballot and choose the winners for the 2021 Awards. If you are not already a member, you can join the convention through the DisCon III website. You must be at least a supporting member in order to participate in the Hugo Awards.

The 2021 Hugo Award base will be designed by Sebastian Martorana. You can see examples of his work on his website. The 2021 Lodestar Award will once again be designed by Sara Felix, president of the Association of Science Fiction and Fantasy Artists.

Instructions for accessing the online nominating form have been sent to eligible members via e-mail. Check your junk e-mail/spam/promotions folders in your e-mail client for this e-mail if you did not receive it. Despite the convention’s efforts, voter information notification messages may be flagged as spam by some e-mail systems.

DisCon III, the 2021 World Science Fiction Convention, will present the 2021 Hugo Awards, which are generally for works first published or appearing in 2020. Any person who was a voting member of at least one of the 2020 or 2021 World Science Fiction Conventions as of 11:59 p.m. Pacific Standard Time (PST; UTC -8) on December 31, 2020 may cast a nominating ballot for the 2021 Awards.

Eligible members of the 2020 and 2021 Worldcons can make up to five nominations in each category. You are not required to nominate in all categories or to fill every nomination blank on the ballot. As the DisCon III website says, “the Hugo Awards are fan-run, fan-given, and fan-supported. We recommend that you nominate whatever works and creators you have personally read or seen that were your favorites from 2020.”

Those people/works with sufficient nominations will move on the the final ballot for the 2021 Hugo Awards, which will be announced later this year after the close of nominations. While members of both the 2020 and 2021 Worldcons can nominate for the 2020 Awards, only members of the 2021 Worldcon are eligible to vote on the final ballot. If you are not yet a member of the 2021 Worldcon, see the DisCon III Membership Page for information about joining the convention.

If you want to nominate works/people for the 2021 Hugo Awards, Lodestar Award for Best Young Adult Book, and Astounding Award for Best New Writer, you must be a member of either the 2020 Worldcon (CoNZealand) or the 2021 Worldcon (DisCon III) by the end of 2020. (You can of course be a member of both, but you can only nominate once.) If you were a member of CoNZealand (Worldcon 78/Wellington, New Zealand) (supporting or attending, or any other membership class that included voting rights), you are already eligible to nominate. If you were not a member of CoNZealand and are not a member of DisCon III (Worldcon 79/Washington, DC, USA), you must join DisCon III by the end of 2020 as at least a supporting member to be eligible to nominate.

END_OF_DOCUMENT_TOKEN_TO_BE_REPLACED

DisCon III, the 79th World Science Fiction Convention, announced on November 23, 2020 that they will include a Best Video Game category in the 2021 Hugo Awards.

As stated in their announcement:

An eligible work for the 2021 special Hugo award is any game or substantial modification of a game first released to the public on a major gaming platform in the previous calendar year in the fields of science fiction, fantasy, or related subjects.

For these purposes, a game is defined as a work wherein player choice, interaction, or participation significantly impacts the narrative, play, meaning, or experience. A major gaming platform means that the game is available on personal computers such as Windows, Mac, or Linux computers (including, but not limited to, via Steam, Epic, itch.io, browser, or direct download), iOS, Android, Switch, PlayStation, and/or Xbox systems. This definition will be provided as part of the nominating and voting ballots.

Members of the 2020 Worldcon (CoNZealand) and the 2021 Worldcon (DisCon III) as of December 31, 2020 may nominate works for the 2021 Hugo Awards, including for the special Best Video Game category. In general, including this special category, works first published in 2020 are eligible for the 2021 Hugo Awards. Nominations open in early 2021. Those works receiving sufficient nominations will go on to a final ballot, where only members of the 2021 Worldcon (DisCon III) may vote. Both attending and supporting members of Worldcon may nominate and vote on the Hugo Awards.

While there is no permanent category for video games in the Hugo Awards, a committee of the WSFS Business Meeting has been studying the possibility of adding such a category for several years now. The 2006 Worldcon (L.A.con IV), offered a Best Interactive Video Game category using their special-category authority for the 2006 Hugo Awards, but dropped it from the final ballot due to lack of interest.

This Is How You Lose the Time War, by Amal El-Mohtar and Max Gladstone (Saga Press; Jo Fletcher Books)

The Expanse, by James S. A. Corey (Orbit US; Orbit UK)

Our Opinions Are Correct, presented by Annalee Newitz and Charlie Jane Anders

LODESTAR AWARD FOR BEST YOUNG ADULT BOOK (Not a Hugo Award, but administered alongside the Hugo Awards)

ASTOUNDING AWARD FOR BEST NEW WRITER, sponsored by Dell Magazines (Not a Hugo Award, but administered alongside the Hugo Awards)

CoNZealand, the 78th World Science Fiction Convention, announced the winners of the 2020 Hugo Awards, Lodestar Award for Best Young Adult Book, and Astounding Award for Best New Wrier at a ceremony conducted online on Saturday 1 Aug 2020 (New Zealand Standard Time). We will publish detailed results, finalist placements, and nominations breakdowns on the 2020 Hugo Award page when they are made available.

The 2020 Hugo Awards Ceremony, being presented online by CoNZealand, the 78th World Science Fiction Convention, will be streamed live (no convention membership necessary) on The Fantasy Network. 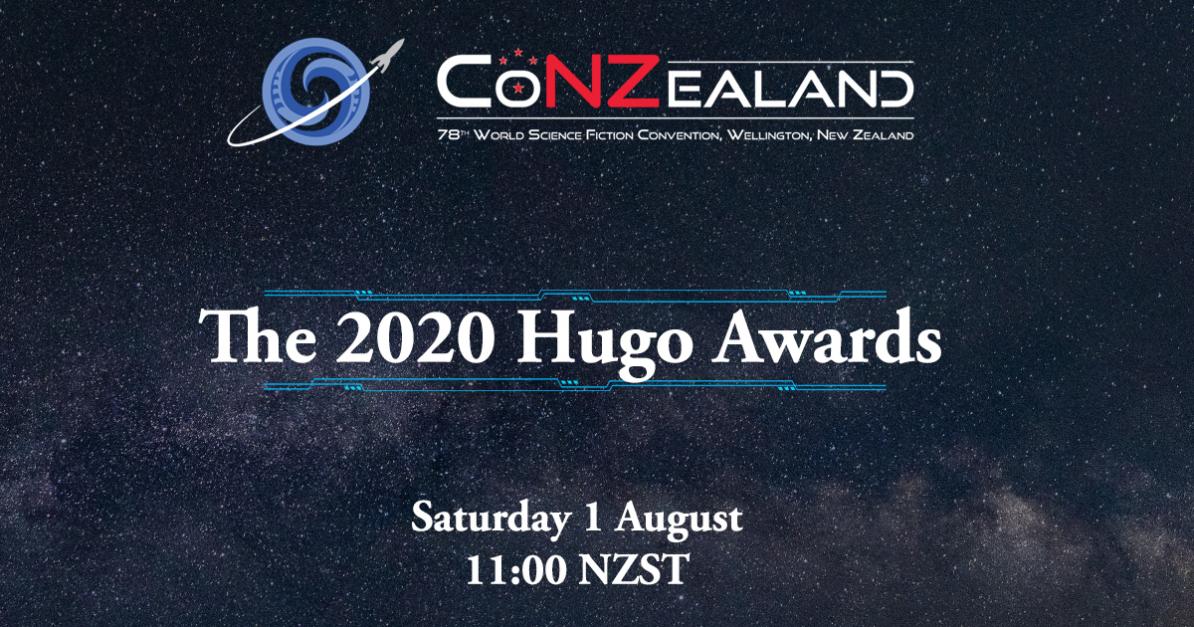 The 2020 Hugo Awards Ceremony is scheduled to start at 11:00 New Zealand Standard Time on Saturday 1 August 2020. You can use web sites like TimeAndDate to convert local time in New Zealand to local time elsewhere. Some of the time conversions are as follows (times are in 24-hour format):

“Shadow Over Mars” (The Nemesis from Terra), by Leigh Brackett (Startling Stories, Fall 1944)

The Cthulhu Mythos, by H. P. Lovecraft, August Derleth, and others

The Canterville Ghost, screenplay by Edwin Harvey Blum from a story by Oscar Wilde, directed by Jules Dassin (Metro-Goldwyn-Mayer (MGM))

Voice of the Imagi-Nation, edited by Forrest J. Ackerman and Myrtle R. Douglas

CoNZealand, the 78th World Science Fiction Convention, announced the winners of the 1945 Retrospective Hugo Awards at a ceremony conducted online on Thursday 30 Jul 2020 (New Zealand Standard Time). We will publish detailed results, finalist placements, and nominations breakdowns when they are made available.